The GREEN Home - What is SEER? EER? and HSPF? 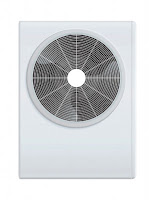 Seasonal Energy Efficiency Ratio (SEER) is most commonly used to measure the efficiency of a central air conditioner. The higher the SEER, the more efficient the system. SEER measures how efficiently a cooling system will operate over an entire season. In technical terms, SEER is a measure of equipment the total cooling of a central air conditioner or heat pump (in Btu) during the normal cooling season as compared to the total electric energy input (in watt-hours) consumed during the same period.

Energy Efficiency Ratio (EER) is a measure of how efficiently a cooling system will operate when the outdoor temperature is at a specific level (95oF). The higher the EER, the more efficient the system. In technical terms, EER is the steady-state rate of heat energy removal (i.e. cooling capacity) by the product measured in Btuh divided by the steady-state rate of energy input to the product measured in watts. This ratio is expressed in Btuh/watt.

Both SEER and EER are included in the ENERGY STAR specification because each rating indicates the energy efficiency of the product under different operating modes. SEER rating more accurately reflects overall system efficiency on a seasonal basis and EER reflects the system’s energy efficiency at peak day operations. Both ratings are important when choosing a product.

Heat Seasonal Performance Factor (HSPF) is the most commonly used measure of a heat pumps heating efficiency. The higher the HSPF, the more efficient the heat pump.In technical term, HSPF represents the total heating output of a heat pump (including supplementary electric heat) during the normal heating season (in Btu) as compared to the total electricity consumed (in watt-hours) during the same period. HSPF is based on tests performed in accordance with AHRI 210/240 (formerly ARI Standard 210/240)1.